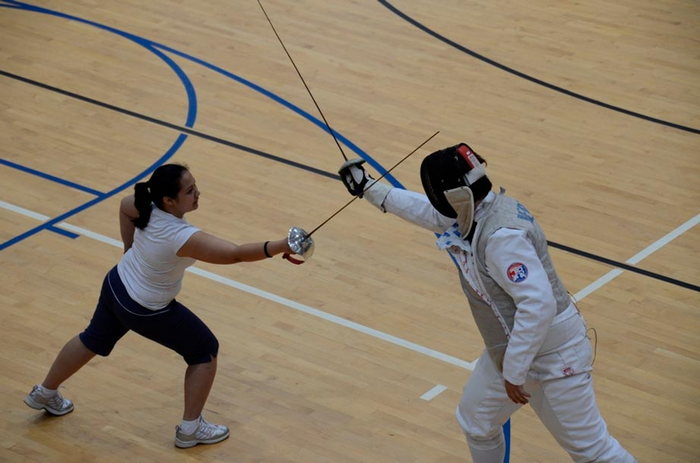 While all sports bring different benefits regarding one’s body, fencing is one which should be considered by individuals and parents alike. First off, fencing is an active sport, requiring great thinking. It is far more interesting than running or swimming, both of which I have tried. In addition to the mental benefit, fencing also offers specific physical benefits as well. Since I ride horses in addition to fencing, I noticed the benefits brought on by fencing while riding. Therefore, my comparisons are all riding related.

The first improvement I discovered when I began fencing was in my level of flexibility. Usually, I can barely touch my toes, mounting my horse without a step is out of the question. After about three weeks of fencing, however, I found that I could touch my toes easily and mount my horse from the ground. This was not only from the repeated lunges during bouts and drills but also from the stretching during warm up and cool down periods.

Perhaps the most useful gain I have made since I began fencing is in the area of balance. In fencing, if one does not stay balanced, one will end up falling over sideways. This different difficulty stems from the position in which fencers place their feet. As my experience increased I found that I was not only able to fence without tipping sideways and flailing wildly, I also sat my horse better.

Lastly, fencers do gain some endurance and muscle. Although one might consider going three minutes as easy, it is quite tricky. During this time, a fencer is moving backward and forwards very quickly, working her arm to defend and attack. While running, the fencer’s stomach and back muscles are working to keep her balanced.

The fencer’s legs and feet are carrying her up and down the piste very rapidly, sometimes incorporating jumps, lunges, or rapid changes in direction. The fencer’s dominant arm is holding the foil and is absorbing the stress of the opponent’s blows, as well as extending to give some. The free arm is attached above the fencer’s head. It is used to add power to a lunge, or as a counterbalance if needed. Fencing is a physical sport.

I would urge one to consider fencing if one is looking to take up a sport. Fencing offers benefits of running and weightlifting without the tedium. Not to mention the best aspect of the game, you get to play with swords.